Reminiscing on my trip through Switzerland hiking the Via Alpina

You see those animals in the foreground? They're EVIL!!!

G'day! This is Alex "Friedman" Friedman, cofounder of Switchbackr Worldwide, Inc. In these trying times, when our access to the outdoors is seriously curtailed for good reason, it can be fun to reminisce on past adventures in far away places. Ergo and heretofore: I present a short photo journal of a trip my dad and I took to Switzerland to hike the Via Alpina.

My old man, SuperFrieds with The Squirrel

Day 1: Zurich to Lucern to Engelberg

Upon setting foot in Switzerland, SuperFrieds and I went posthaste to catch a train to Lucerne. What struck me most about Switzerland was the orderliness of everything: everything was clean, precise, and uniform. Catching the train was notably easy for two clueless American tourists who spoke not a lick of French or German. It was raining off and on this first day, which made the pretty Lucern look even prettier. 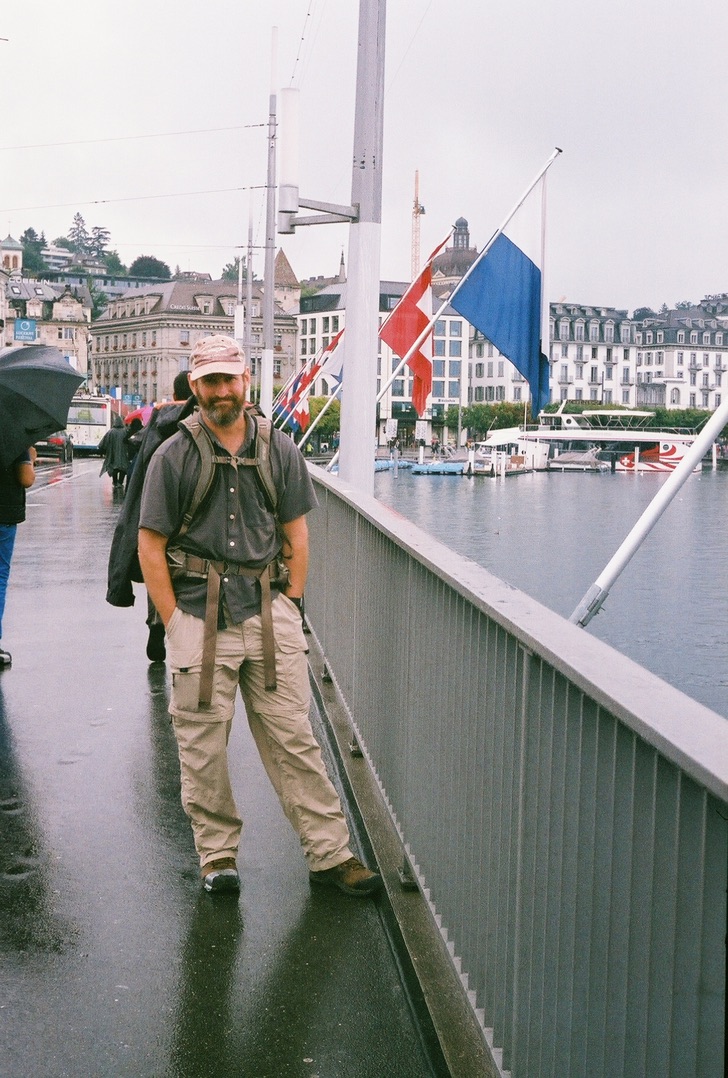 Above: Views from Lucerne

After spending a bit of time in Lucerne, my pops and I caught another train to Engelberg, the start of our hike and found a room in a cheap hotel near the trailhead. A quick note on our plan for camping: unlike other Via Alpina countries, Switzerland has (as of time of writing) very lax outdoor camping laws. As a result, we brought our backpacking tent, a trusty Big Agnes Copper Spur UL 2 which we have used for almost seven years. However, we planned on staying in hotels occasionally, especially when SuperFrieds was "too sticky" and required a shower.

At Engelberg, we ended up staying at the Hotel Banklialp, which had some pretty sweet views:

We woke up in the Banklialp hotel and ate a hearty breakfast of muesli, bread, cheese, and multiple espressos. It had stopped raining but clouds still lingered at higher elevations. As we began the hike up to the Jochpass, we noticed a mellifluous sound of wind-chimes which we soon realized were cowbells. As pleasant as these bells sounded to us humans, they must have been quite annoying for the cows to whom they were permanently affixed. Little did we know, but the Swiss cow is a rare and particularly aggressive breed of cow, I speculate for the very fact of these bells... More on this later.

Climbing up and up, underneath a ski lift, we arrived at the Jochpass—our first mountain pass. Before this, we took an afternoon row on the Trübsee, a lake near the top of the Jochpass which in normal, uncloudy conditions should have yielded some "banger" scenery. Unfortunately, it was rather cloudy for us, so we just rowed around a little, careful not to lose sight of the shore and inadvertently “Shackleton” ourselves. We stayed the night at the creatively-named Hotel Engstlenalp. 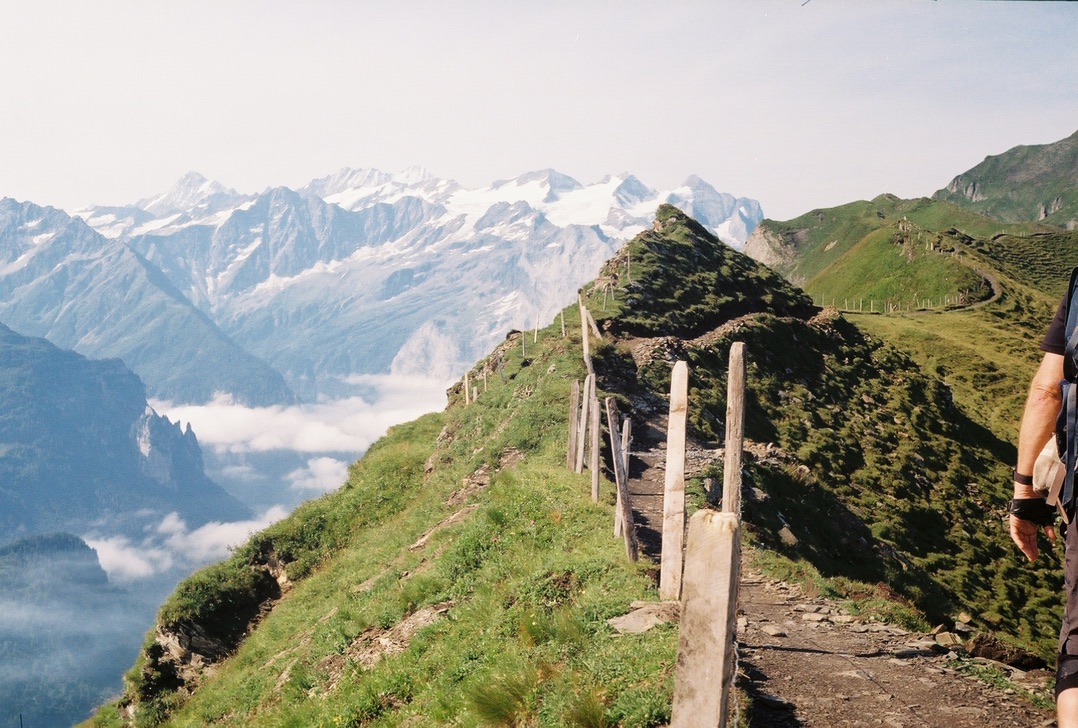 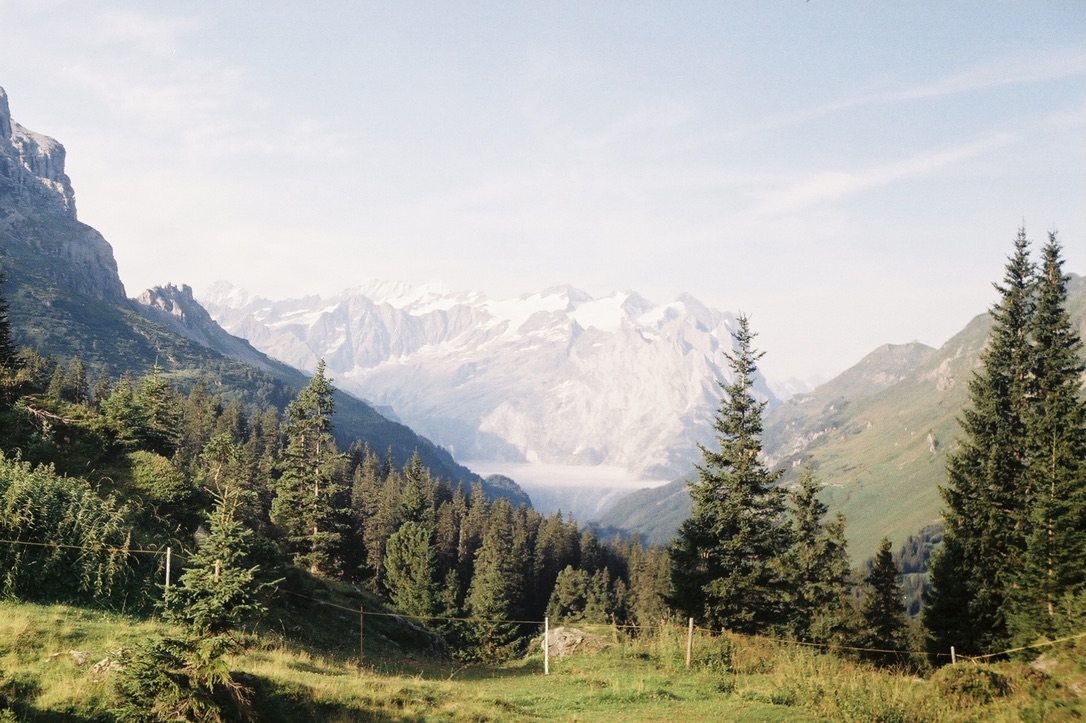 We ended the day just a wee bit short of Meiringen at a town called Reuti, where we stayed at a paid campground which, crucially for The Squirrel, had a shower.

Today was beast day #1. We had approximately a 23km (15 miles in Freedom Units) hike from Meirengen to Grindelwald, during which we were beset by a late start, multiple wrong turns, and some lost sunglasses which I had to run back for two miles to retrieve... All in all we ended up hiking around 25 miles. The day ended with some directionless "bushwacking" through the pasturelands above Grindelwald. Overall, some of the prettiest views of the trip:

After the mega hike the day before, I was definitely feeling it on Day 5. Another late start (on the trail by noon), but nothing too intense – just 10 miles. We had some amazing views of the North Face of the Eiger, along with Mönch and Jungfrau.

A view of Jungfrau
{"items":["df70d6_f2b72b310db64c76b9e55048161fb46a~mv2.jpeg","df70d6_30b1796cd0d5436a8413fb1bd6037955~mv2.jpeg","df70d6_308691d2b1834771b1bbfbb376ee42a0~mv2.jpeg","df70d6_10514b433d8145a08b267cb933391895~mv2.jpeg","df70d6_1f7b80f0f39a44a1b92f6486ad21f048~mv2.jpeg"],"styles":{"groupSize":1,"showArrows":false,"cubeImages":false,"cubeType":"fill","cubeRatio":1,"isVertical":false,"gallerySize":"300","collageDensity":0.8,"groupTypes":"1","oneRow":false,"imageMargin":10,"galleryMargin":0,"floatingImages":0,"chooseBestGroup":true,"smartCrop":false,"hasThumbnails":false,"enableScroll":true,"isGrid":false,"isSlider":false,"isColumns":false,"isSlideshow":false,"cropOnlyFill":false,"fixedColumns":0,"enableInfiniteScroll":true,"isRTL":false,"minItemSize":120,"rotatingGroupTypes":"","rotatingCubeRatio":"","gallerySliderImageRatio":1.7777777777777777,"numberOfImagesPerRow":0,"numberOfImagesPerCol":1,"groupsPerStrip":0,"borderRadius":0,"boxShadow":0,"gridStyle":0,"mobilePanorama":false,"placeGroupsLtr":false,"viewMode":"preview","thumbnailSpacings":0,"galleryThumbnailsAlignment":"none","isMasonry":true,"isAutoSlideshow":false,"slideshowLoop":false,"autoSlideshowInterval":4,"useCustomButton":false,"bottomInfoHeight":0,"titlePlacement":"SHOW_ON_HOVER","galleryHorizontalAlign":"center","galleryTextAlign":"center","galleryVerticalAlign":"center","scrollSnap":false,"itemClick":"link","fullscreen":false,"allowSocial":false,"allowDownload":false,"allowTitle":true,"allowDescription":false,"loveButton":false,"loveCounter":false,"videoPlay":"onClick","scrollAnimation":"NO_EFFECT","scrollDirection":0,"overlayAnimation":"NO_EFFECT","arrowsPosition":0,"arrowsSize":23,"watermarkOpacity":40,"watermarkSize":40,"useWatermark":true,"watermarkDock":{"top":"auto","left":"auto","right":0,"bottom":0,"transform":"translate3d(0,0,0)"},"loadMoreAmount":"all","defaultShowInfoExpand":1,"allowTitleExpand":true,"allowDescriptionExpand":true,"allowLinkExpand":true,"expandInfoPosition":0,"allowFullscreenExpand":true,"fullscreenLoop":false,"galleryAlignExpand":"left","addToCartBorderWidth":1,"addToCartButtonText":"","slideshowInfoSize":200,"playButtonForAutoSlideShow":false,"allowSlideshowCounter":false,"hoveringBehaviour":"APPEARS","thumbnailSize":120,"magicLayoutSeed":1,"imageHoverAnimation":"NO_EFFECT","calculateTextBoxHeightMode":"AUTOMATIC","calculateTextBoxWidthMode":"PERCENT","textBoxHeight":0,"textBoxWidth":200,"textBoxWidthPercent":50,"textImageSpace":10,"textBoxBorderRadius":0,"textBoxBorderWidth":0,"textsVerticalPadding":0,"textsHorizontalPadding":0,"titleDescriptionSpace":6,"customButtonText":"","customButtonBorderWidth":1,"customButtonBorderRadius":0,"loadMoreButtonText":"","loadMoreButtonBorderWidth":1,"loadMoreButtonBorderRadius":0,"imageInfoType":"NO_BACKGROUND","itemBorderWidth":0,"itemBorderRadius":0,"itemEnableShadow":false,"itemShadowBlur":20,"itemShadowDirection":135,"itemShadowSize":10,"imageLoadingMode":"BLUR","expandAnimation":"NO_EFFECT","imageQuality":90,"usmToggle":false,"usm_a":0,"usm_r":0,"usm_t":0,"videoSound":false,"videoSpeed":"1","videoLoop":true,"galleryLayout":1,"gallerySizeType":"px","gallerySizePx":"300","allowHover":true,"mobileSwipeAnimation":"NO_EFFECT","gotStyleParams":true,"showVideoPlayButton":true,"selectedLayout":"1|none|1|fill|false|0|true","layoutsVersion":2,"selectedLayoutV2":1,"isSlideshowFont":false,"externalInfoHeight":0,"externalInfoWidth":0},"container":{"galleryWidth":2580,"galleryHeight":1440,"scrollBase":0,"height":null,"width":null}}

Beast day #2. We left Wengen around 10:40am (surprise! another late start) and started toward Mürren where we could see amazing views of the "wall" formed by the Eiger, Mönch, and Jungfrau. After Mürren, we suffered a soul-crushing climb up to the Sefinafürgga mountain pass. Midway, we stopped at the Rotstockhütte, where they had beer but not food... we prudently shared a pitcher to carboload. We made it to the top of Sefinafürgga at 7:15pm and then had another 2 hours of downhill to Griesalp. We arrived with our headlights on and pitched our tent in a random field. The Squirrel did not get its requisite delousing shower, and SuperFrieds kept complaining how "sticky" he was.

Beast day #3. Another late start, and another YUGE mountain pass to get through—the Hohtürli, the highest point of our hike at 2,778 meters (9114 Freedom feet). This time, SuperFrieds wasn't feeling too well thanks to yesterday's grueling hike along combined with the fact that he chugged an inordinate amount of sparkling apple cider with breakfast today. Noticing his enfeebled hiking capabilities, I graciously offered to carry some of his pack, which he accepted. If it wasn't for me, his old-man legs probably would not have made it to Kandersteg, a fact I like to remind him of as often as possible. Once we made it to the top of the pass, we stopped at the Blüemlisalphütte, enjoyed some food and beer, then set off on another long, steep downhill, passing by the Oeschinen Lake on the way to Kandersteg.

Moody... some trees perched above the Oeschinensee

After two beast days in a row, SF and I figured it was time to rest our tired bones. We toured the town of Kandersteg, ate some rösti and played some chess.

A relatively easy day with a leetle bit of uphill but nothing too serious. We had a late summer thunder storm roll through. Being the Caliphurnia native that I am, I was relatively unfamiliar with such meteorological phenomena; however, SuperFrieds, raised on the East Coast, claimed we should be good to go. We stayed the night in Adelboden in “Guesthouse Alive” which was an awesome place run by a family who rented out rooms of their house and were exceedingly nice.

The hike from Adelboden to Lenk was relatively uneventful. The hike from Lenk to Gstaad was a little more spicier. Gstaad is a bit of a shmancy town—the cheapest place to stay in town was 1,100 francs! Luckily, we found a very cheap and hospitable room in one of Switzerland’s many government-run hostels just outside of town. 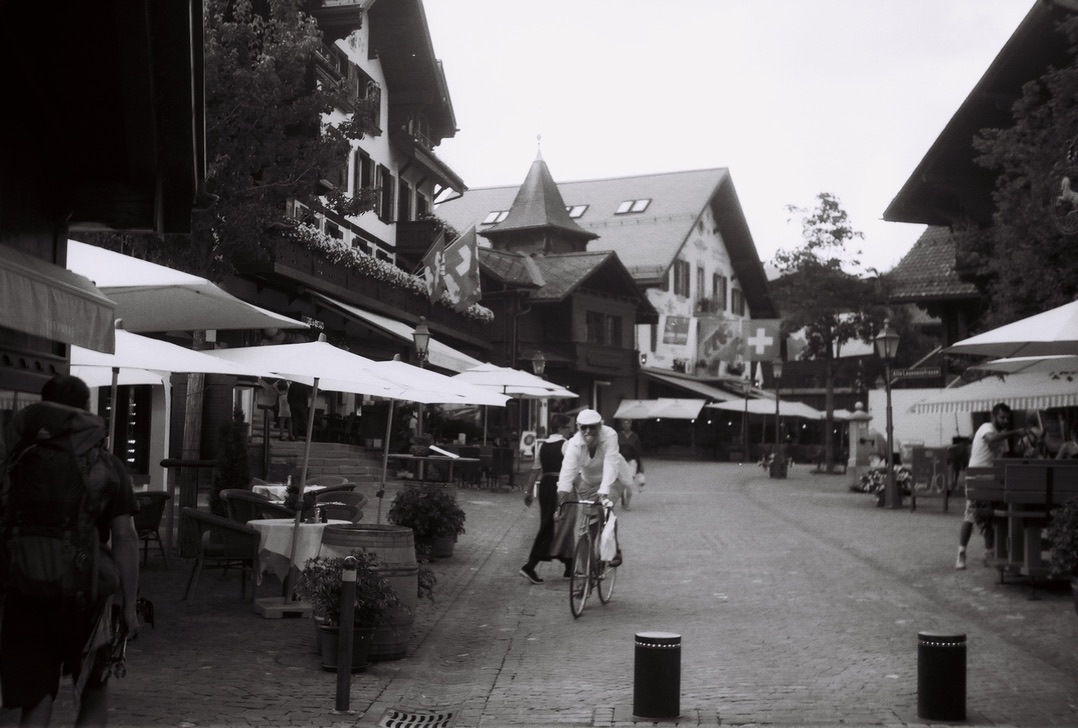 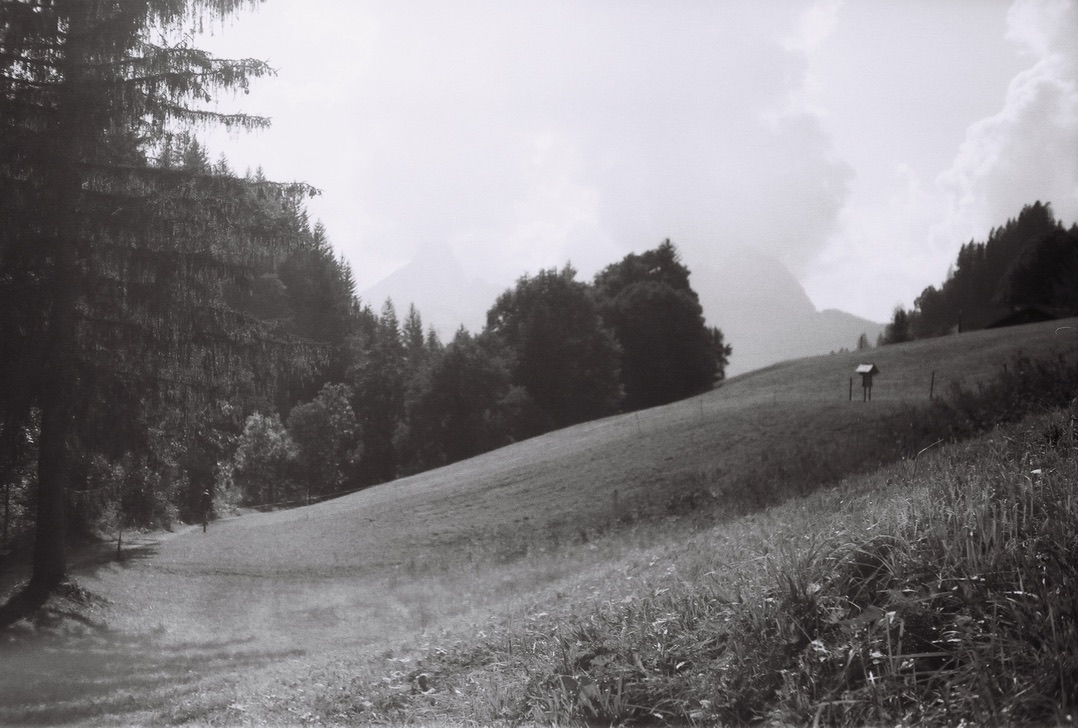 Above: arriving in Gstaad

This was a long-ish day which started with an odd cow parade through central Gstaad. After doing some cursory Googling, I learned that this festival is called the Almabtrieb, and it marks the return of the cows from their alpine pastures to barns in preparation for Winter. While in America we regard such cattle drives as “work,” the Swiss, in their European ways, celebrated this occasion with a joyous and time-wasting festival.

This ended up being a very cow-centric day, for it was during that day when I realized the term “coward” is rather a misnomer. You see, like most other hikers, I occasionally enjoy singing John Denver’s “Take Me Home, Country Roads” in a falsetto voice while I’m on the trail. Today happened to be just one of those days. As I was passing through a tranquil Swiss field punctuated by the legato melody of alpine cowbells, it seemed that my rendition of Denver’s hit single seemed to arouse the ire of some nearby bovines. Before I knew it, they were in full-fledged attack, moving swiftly across the field in cow-echelon formation. I had no choice but to make like the French and retreat over a nearby barbed wire fence.

The official Swiss web guide had us stopping at a town called L'Etivez today. However, L'Etivez ended up being a tiny town whose only hotel was booked for the night. SuperFrieds and I thus continued to Chateau d’Oex (pronounced "chat-oo deh oiks"), a more substantial town which was hosting a Volkswagen Convention when we arrived. It turns out the only two cars of note that Volkswagen ever produced were the Bug and that hippy van. Change my mind.

SuperFrieds and I intended to continue to Rossiniere from Chateau d’Oex. We foolheartedly forwent the opportunity to re-stock on food in Chateau d’Oex and instead planned to get food at Rossiniere. Unfortunately, we ran into a problem which throughout our trip was a recurring source of annoyance and vexation. And that was what we like to call "getting Swiss F'd." Specifically: whenever you want to buy something in Switzerland is precisely when the stores have all just closed. When we rolled up to Rossiniere, all the grocery stores were closed for the sabbath and all the restaurants had just stopped serving food.

Since we couldn’t find any food in Rossiniere and the next nearest grocery store would be in Montreaux, we were forced to turn around and return to Chateau d’Oex. It was impossible to return on foot since because we were lazy so we hopped on a train instead.

We stocked up on food and headed out from Chateau d’Oex for Rochers de Naye. The previous night, it had rained for the first time since the day we arrived, and it remained pretty foggy/cloudy today. As a result, the trail was incredibly muddy, so hiking downhill was like a nice slip ‘n slide lubricated by mud and cow patties. 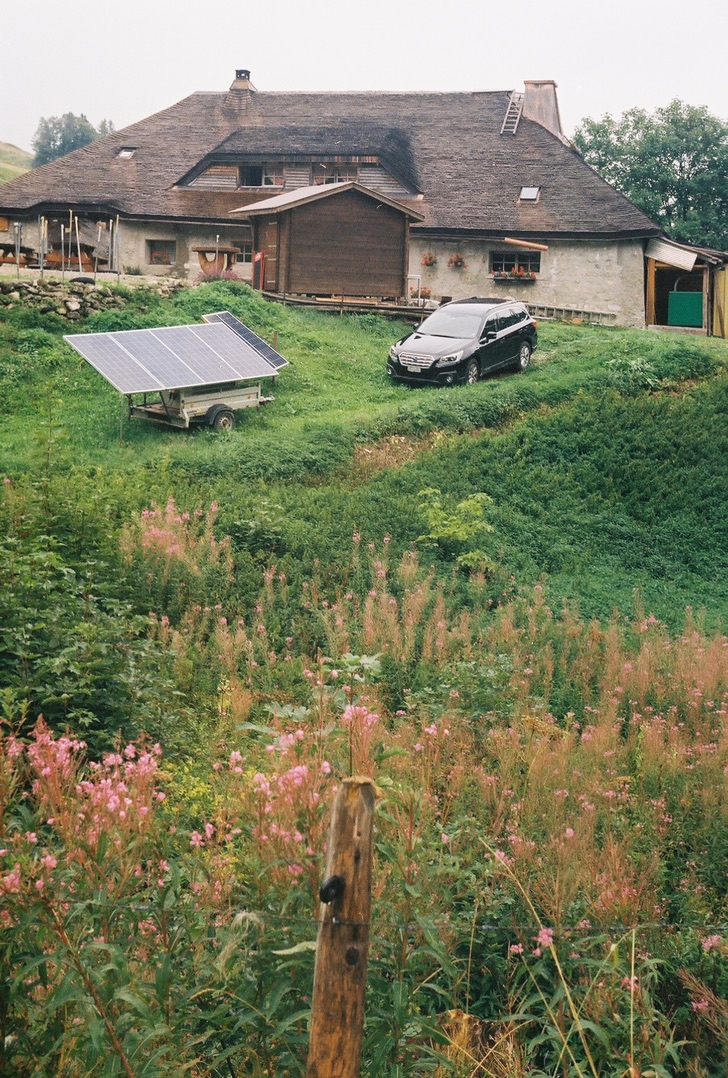 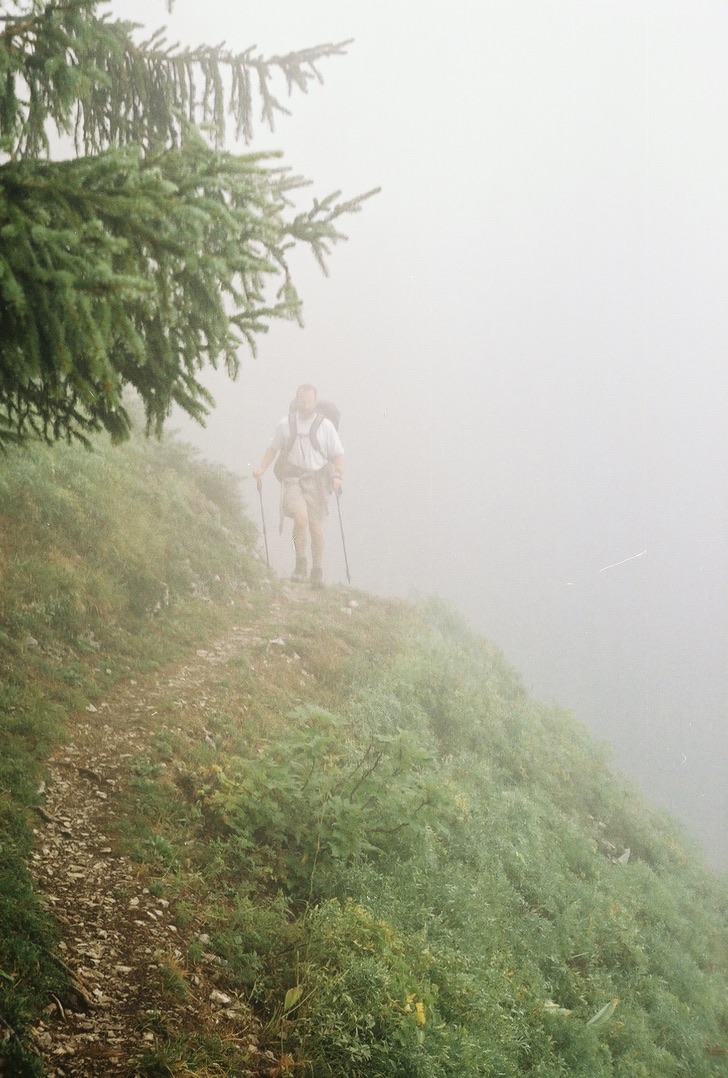 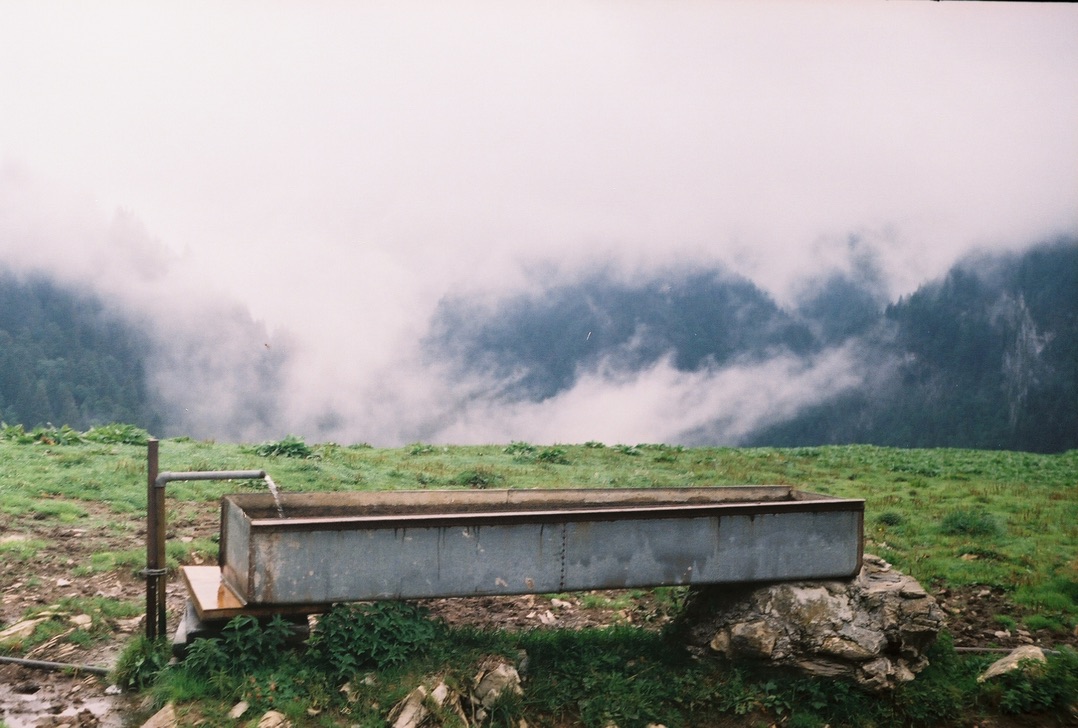 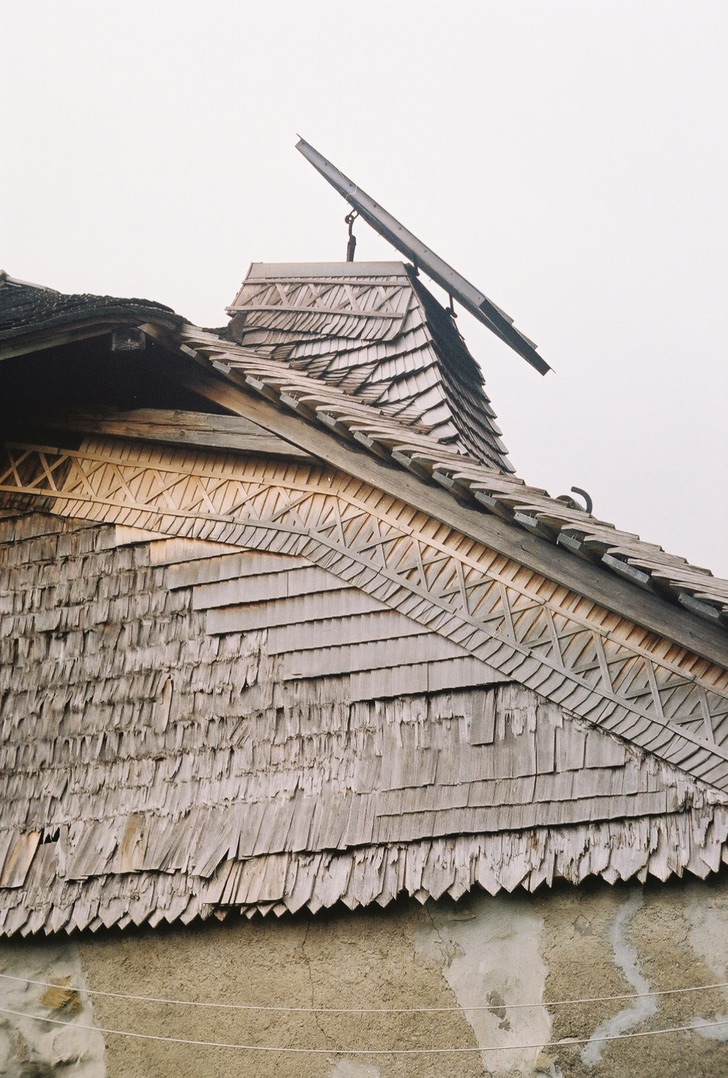 Rochers de Naye is like one half train station, one half restaurant, and one half hotel. From the official Swiss Guide to the APR, we were supposed to spend this night at the hotel and eat from the restaurant, which is what we duly planned on doing. However, lo and behold, we got Swiss F'd again: the entire facility had shut down operations for winter three days earlier. All that was open was a small enclosed vestibule/entrance to the train station where we pitched our tent and dug into quickly dwindling food provisions (a small tin of jam, 1/2 a block of cheese, and some bread).

We woke up to clear skies and beautiful scenery. The clouds from yesterday had all cleared, making for an awesome sunrise and views of lake Geneva from up high. Way in the distance, we could see the Matterhorn looming.

The Matterhorn in the distance

We hiked relentlessly downhill, driven by our monomaniac desire to satiate our hunger by the crepes which we knew awaited us in Montreaux. For those of you who don't know, crepes are just really thin pancakes. Our crepe craving was so strong that, unlike every other day of our trip, we actually woke up and began hiking at a reasonable hour. For this, we were rewarded with awesome sights of mountain ibex(?) along the ridges near our trail. 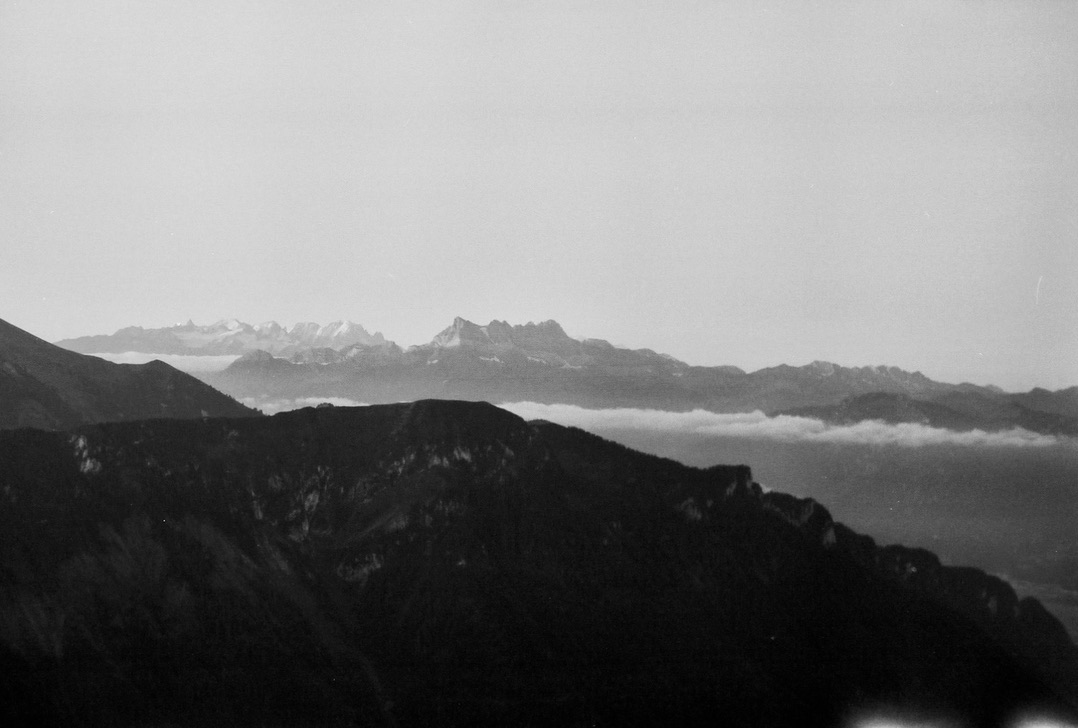 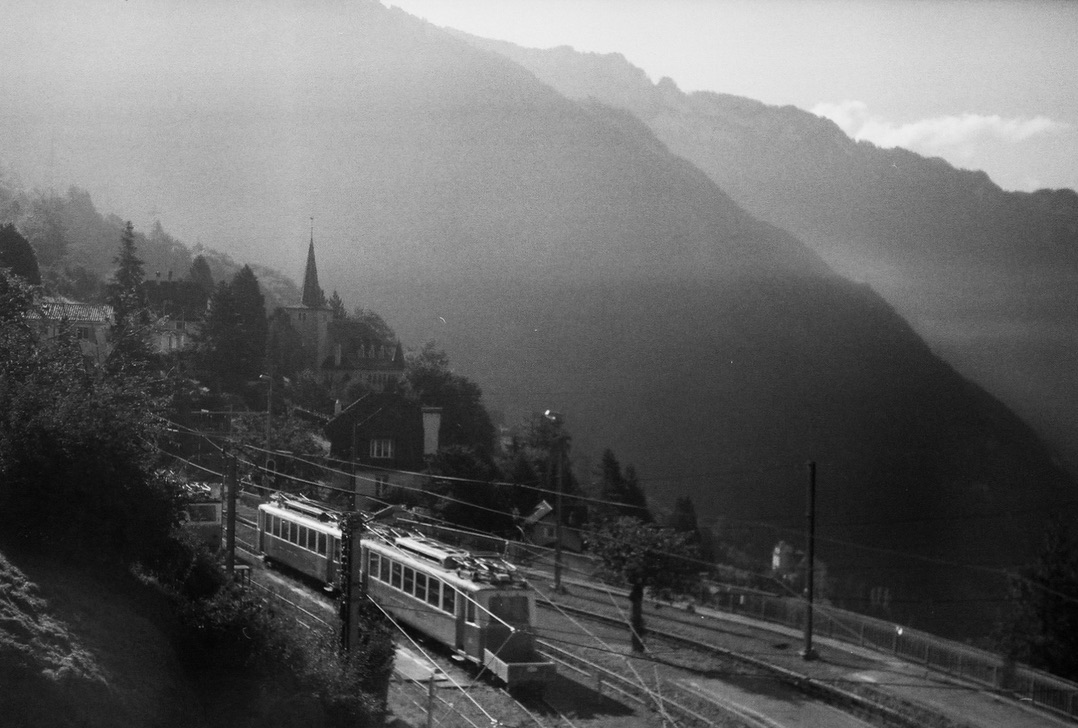 We finally got down, touched the water of Lake Geneva, and gorged the crepes which we so ardently desired. It was a good end to a good hike. 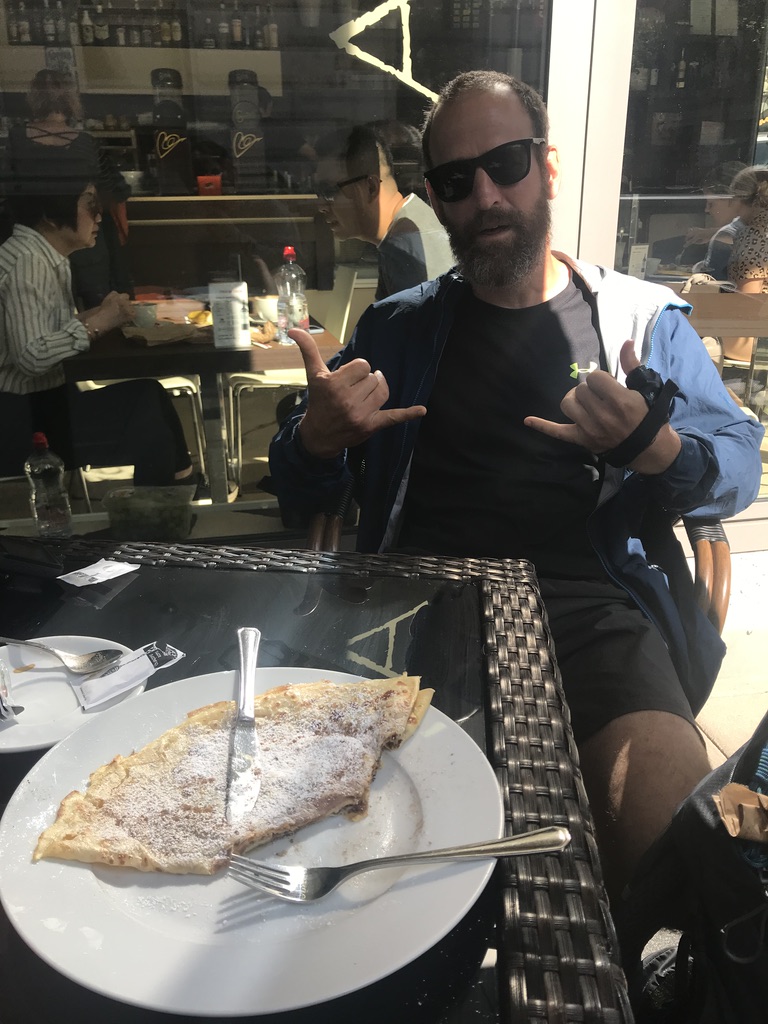 The 8 Most Common Misconceptions about Skiing